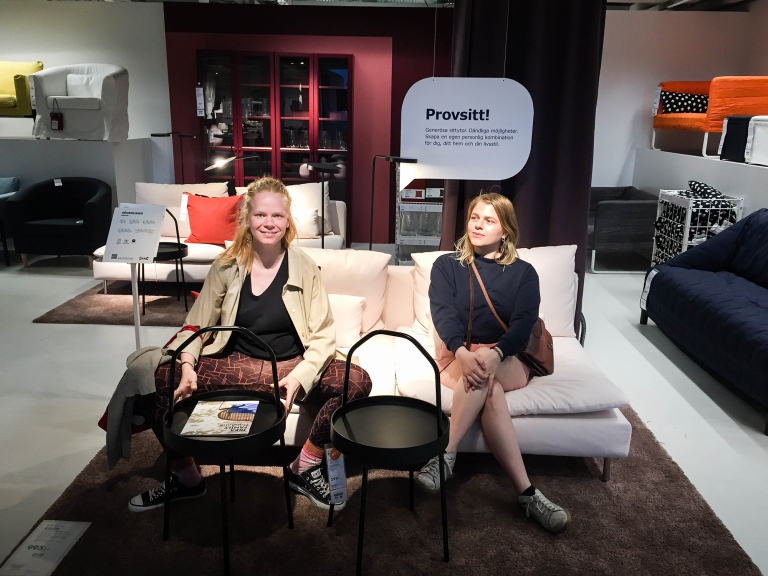 Apparently, a lot of people are curious about the Ikea experience in Sweden and if it’s any different from what we know in Belgium, or other European countries by extension. I have to disappoint anyone who thought Ikea would be like a royal experience in the motherland. It’s not. It’s. Exactly. The same.

But this visit to Ikea was by far my best Ikea experience and it had everything to do with my company. I had two Swedes joining me on my trip, Karin and Moa. They speak Swedish and don’t take themselves too seriously which made them the perfect company to lighten up the mood when all the choices were getting too much to handle for me.

Ok, but what exactly made this trip so much better?

The language. Ikea uses a system to give names to every little thing you can buy there. Before I started learning Swedish I thought those names just sounded very Ikea-ish. Ever since I started understanding some Swedish, I’ve often wondered ‘But why would they name this object with this ordinary word?”. “Do Swedish people also wonder about that?” and “How do they even choose these names?”. I was puzzled. But then someone told me there’s a system.

“Ikea designers can’t just pick any name for their design”

There’s an entire database of words to use and a system ordering those words by product type. For example: bookcases are named after professional occupations or boys’ names, outdoor furniture is named after Scandinavian islands and bed sheets, comforters and pillowcases are named after flowers and plants. Read more about that system here.

But still, understanding the system didn’t answer my question about how Swedes handle those names and how they behave at Ikea. It remained a mystery. Until now. Until I noticed how my Swedish friends where making jokes about the names. In Swedish. Not to impress me, the strange intruder from abroad. I could tell by the way they rattled & giggled on in Swedish. Way faster than when they would normally speak to me in Swedish. But I did understand what they were giggling about. So I just joined the party.

And that’s how this became my best Ikea visit so far.

It started with a ‘freedom’ couch (Friheten) and escalated quickly when we entered the market hall where we found a ‘valuable’ can opener (Värdefull) and an ‘interesting’ pepper grinder (Intressant). If you’re looking for good reasons to learn Swedish, this might be one. It really lifted my Ikea experience to the next level. But apart from this Swedish insiders’ fun, my Ikea experience in Sweden was exactly the same as in a Belgian store.

There, just saved you a trip to Ikea on your next visit to Sweden. You’re welcome.

Even the jokes you get when you tell people you’re going to Ikea are the same: “Good luck at buying only what you need!”, “Haha, there’s no way you’re just going to buy [insert product name] at Ikea, good luck!”. But actually, I did really buy only what I needed. Leen vs. Ikea: 1-0

Btw, don’t hesitate to send me other Swedish mysteries you would look like to see resolved. This was fun. I think I just found my calling.

One thought on ““Is going to Ikea different in Sweden?””